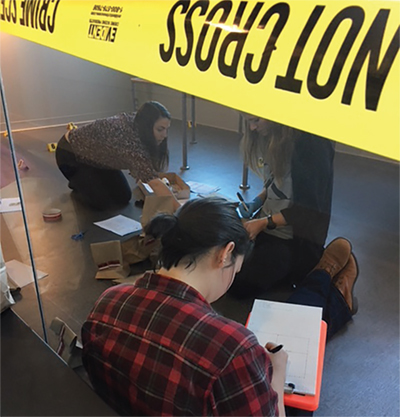 The past academic year has been busy and productive for the FAC. The year began with the first FAC Open House at the Bass Forensic Anthropology Building. The entire Knoxville community was invited to see what forensic anthropologists really do with hands-on stations, a tour of the FAC laboratory, and learning about current FAC research. Several hundred community members helped dedicate a memorial garden to all the body donors and their families as well.

This coming year the FAC will continue its forensic research projects and train students and law enforcement communities across the globe. One project, with partners at Lincoln Memorial University and funded by the National Institute of Justice, investigates how certain lipids (fat molecules) in bone can reveal how long ago a person died (postmortem interval). This method has been used on muscle, but never before from bone, which survives much longer than soft tissues after death.

The FAC is also conducting research in biometrics, which are images of the irises of the eye, fingerprints, and face that can be used to identify people after they have died. The study involves FAC pre-donors who have indicated that they would like to be involved in research while they are alive. In the future, this technology can be used by military and law enforcement to identify quickly people at the scene. Other new FAC projects include using 3-D technologies to map graves and using spatial mapping software to estimate the postmortem interval by mapping decomposition changes in a body.

The FAC welcomes two new staff members this year. Mary Davis is a new FAC research associate. Previously at the Georgia Bureau of Investigation, Davis helps facilitate FAC research and coordinate the body donation program. Melanie Beasley, who was featured in last year’s newsletter, has launched new studies on how isotopes can be measured in different human tissues, such as hair or teeth, to infer where people lived during different stages of their life – this can help forensic investigators identify unknown remains.

In all, FAC professors and students and their partners have published more than 20 articles and presented nearly 40 papers at scientific meetings. FAC also conducts about 40 outreach presentations a year to learners of all ages – from preschool children to retirement and civic groups. Another great year for the FAC!