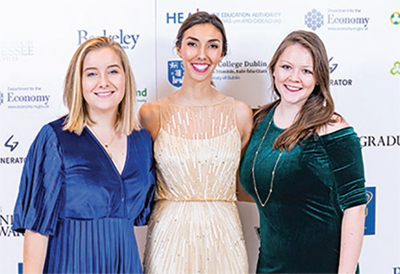 Students majoring in anthropology study topics ranging from human anatomy, genetics, and biological anthropology to the study of other cultures, learning both scientific methods and how critically to describe new observations and insights. For this reason, undergraduate anthropology students are consistently among the top of their class at UT.

Among the high-flying achievers this year was Sierra Roark, who received her BA in anthropology at UT in 2016. Sierra was one of three UT students highly commended in The Undergraduate Awards and traveled to Ireland to receive award. Anthropology major Daniel Ford was among the top five graduates in the entire UT College of Arts and Sciences. Daniel is a marketing research analyst at Shelton Group in downtown Knoxville, a leading United States marketing communications firm, where he worked during his college career.

Biological anthropology doctoral student Alexandra Emmons, teaming up with Shawn Campagna, professor of chemistry, received a $5,000 grant from the Office of Research to study “Skeletal DNA Degradation through Bone Metabolomics.” The project combines the latest DNA sequencing techniques with mass spectrometry in order to identify microbial communities in human bone by the bio-molecules they produce. The microbial community composition within different bones reveals tangible clues to bone metabolism and how those bones degrade in the skeleton after death. Emmons, as a doctoral student of Amy Mundorff, is keenly interested in differential DNA degradation in the human skeleton. Trained by Campagna in the Biological and Small Molecule Mass Spectrometry Core, Emmons is learning first-hand the techniques of microbial metabolomics, which includes use of chromatography coupled with mass spectrometry. This research builds future capabilities at UT, such as forensic fingerprinting techniques.