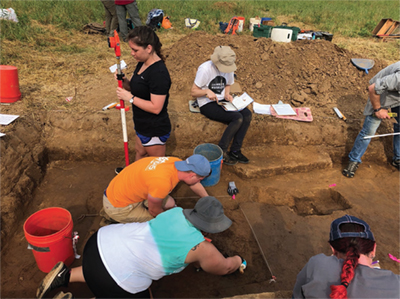 In May, UT archaeology students joined Professor Kandace Hollenbach on a field school excavation on the UT Cherokee Farm campus, about 100 meters inland from the Tennessee River. The area has been occupied for thousands of years, from the Archaic Period (~8,000 years ago) through the early 20th century. Students excavated several features dating to the Woodland Period (~1000 BC – 600 AD), including what appears to be a fire hearth, as well as the cellar of a late 19th century house.

The 2018 summer field school in historical archaeology took place in Northumberland County, Virginia. The project, led by Professor Barbara Heath, explores cultural and environmental change over time at Coan Hall. Sometime before 1644, John Mottrom, one of the earliest English settlers of the region, established Coan Hall plantation on a tributary to the Potomac River, and his home became the headquarters of the first English community, Chicacoan, on Virginia’s Northern Neck. Summer field school participants exposed portions of palisade lines associated with a D-shaped enclosure that was probably built to defend the settlement during the first years of English occupation; excavated a circa 1640s pit that contained both European and Indian artifacts; and excavated portions of two later pits that residents filled with domestic trash in the early 18th century. The results of this summer’s fieldwork will contribute to understanding the development of the cultural landscape at Chicacoan and early colonialism in the Atlantic World.