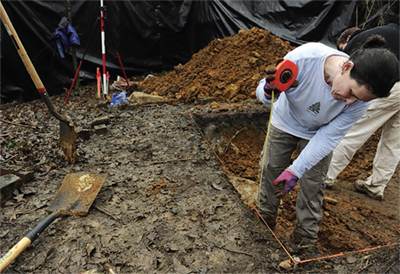 The Forensic Anthropology Center teamed up with ORNL researchers to use airborne laser scanning and 3-D modeling to find unmarked gravesites. The technique, which makes use of LIDAR, could help accelerate the search for clues during crime scene investigations.

Led by Katie Corcoran (ORNL), Amy Mundorff (anthropology), and colleagues, students with the Forensic Anthropology Center prepared a site with three human graves of varying sizes, including one mass grave, one control pit, and surrounding undisturbed ground. Using a tripod-mounted terrestrial LIDAR sensor, the team scanned the test area four times over a 21-month period, picking up millions of data points that collectively painted a digital picture of what was happening at the ground’s surface. The team then used the sensor data to 3-D model small changes in ground’s elevation—changes that were caused by disturbances of the soil as the bodies were decomposing. The study, published in Forensic Science International, is the first to use these techniques to locate unmarked graves.

“This study helps forensic human rights investigators because it reduces the amount of time a team must be on the ground in active conflict situations,” says Dawnie Steadman, director of the Forensic Anthropology Center.