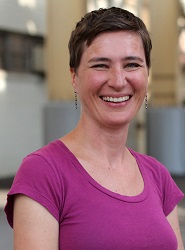 Giovanna Vidoli’s dissertation research focused on population distances and geopolitical landscape of Mississippian populations in the Middle Cumberland Region, Tennessee.   Much of her work experience is in mass fatality recoveries and identifications.  Prior to obtaining her PhD, she volunteered in Guatemala with the Forensic Anthropology Foundation of Guatemala (FAFG) team, aided in the preservation of remains of victims from the World Trade Center September 11, 2001, attacks, and also aided in mortuary operations during the recovery of victims of the Boxing Day Tsunami in Thailand.  She has worked with family members of mass fatality victims communicating daily with World Trade Center families in her role as Assistant Director of World Trade Center Operations at the Office of Chief Medical Examiner, New York.

In addition to working in Thailand and Guatemala, she taught short courses in osteology and archaeology in Bogota’ Colombia to forensic anthropologists, odontologists, and pathologists.  She also was a Fellow with the Joint POW/MIA Accounting Command-Central Identification Laboratory (JPAC-CIL) where she was on a recovery team in Laos.  Her current research focuses on comparing decomposition rates of humans as related to pigs and rabbits; recording fracture patterns of airline crash victims; and identification modalities for skeletal remains including estimating the error rates in craniofacial superimposition and ancestry estimation.