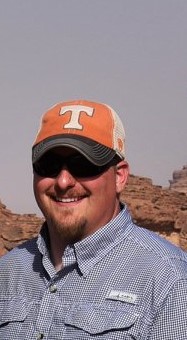 I am pursuing a master’s degree in Anthropology focusing on Mediterranean Archaeology. I hold a BA in History from North Greenville University (SC), a second BA in Religious Studies with an Anthropology minor from the University of Tennessee. I am a US Navy veteran where I served aboard the USS Bonhomme Richard (LHD-6) homeported in Sasebo, Japan (2012-2016).

My fieldwork and professional experience include participating in the 2019 field season of the ‘Ayn Gharandal Archaeological Project in Jordan through UTK directed by Drs. Erin and Robert Darby; assisting in the public archaeology phase of the RiverLine Project at the University of Tennessee Research Park at Cherokee Farm under the direction of Dr. Kandace Hollenbach; trained in the use of Reflectance Transformation Imaging (RTI).