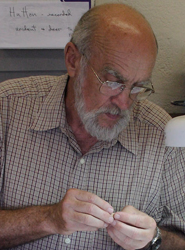 An internationally recognized authority in zooarchaeology, Dr. Klippel’s research has covered prehistoric and historic sites in the Southeastern and Middle Atlantic regions of the US, the Caribbean, and in the Eastern Mediterranean. Dr. Klippel was the primary person overseeing training in the identification and analysis of animal remains within the department, using technical methods and equipment critical to modern research. Over the years, he has trained hundreds of our archaeological and biological anthropological students, including in forensics.

Working with the Forensic Anthropology Center, Dr. Klippel served on many graduate student committees and used the Anthropological Research Facility for many of his taphonomic experiments. In a lasting contribution to Forensic Anthropology, Dr. Klippel discovered that evidence for squirrel gnawing can be used to help estimate time since death, because squirrels do not gnaw on bones for at least a year after death. He also showed that raccoons, rats, squirrels and opossums all leave distinctive, recognizable signatures.

Among his other contributions to the Anthropology Department, Dr. Klippel oversaw and expanded the extensive research collection of animal bones (first established by Paul Parmalee) now curated by the Anthropology Department and at the McClung Museum. The collection, which spans early prehistory to the twentieth century, enriches the training of UT students and attracts visiting researchers from around the country and internationally. The zooarchaeological materials in the Department of Anthropology, including over 11,000 skeletons in excellent condition, are regarded as one of the finest comparative research collections in Eastern North America, continually in use by students and outside researchers, and for TBI, FBI, and NCIS training in association with the Forensic Anthropology Center.