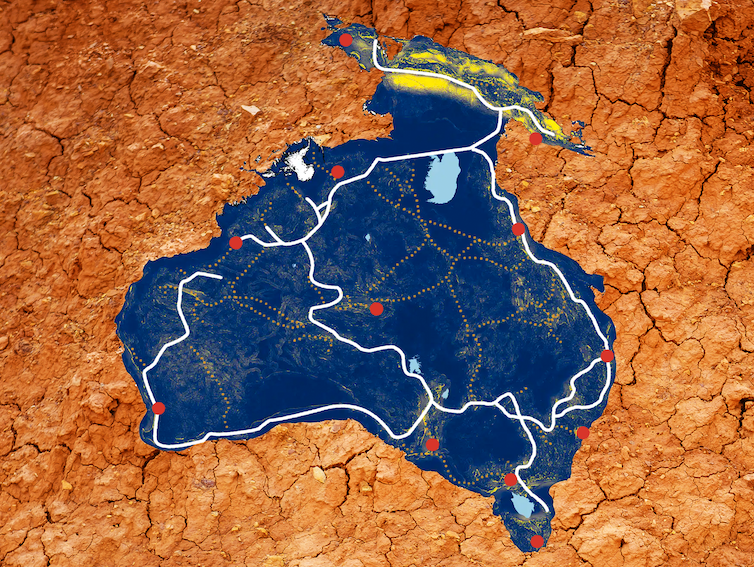 There are many hypotheses about where the Indigenous ancestors first settled in Australia tens of thousands of years ago, but evidence is scarce.

Few archaeological sites date to these early times. Sea levels were much lower and Australia was connected to New Guinea and Tasmania in a land known as Sahul that was 30% bigger than Australia is today.

Our latest research advances our knowledge about the most likely routes those early Australians travelled as they peopled this giant continent.

Read more: The First Australians grew to a population of millions, much more than previous estimates

We are beginning to get a picture not only of where those first people landed in Sahul, but how they moved throughout the continent.

Modelling human movement requires understanding how people navigate new terrain. Computers facilitate building models, but they are still far from easy. We reasoned we needed four pieces of information: (1) topography; (2) the visibility of tall landscape features; (3) the presence of freshwater; and (4) demographics of the travellers.

We think people navigated in new territories — much as people do today — by focusing on prominent land features protruding above the relative flatness of the Australian continent.

To map these features, we built the most complete digital elevation model for Sahul ever constructed, including areas now underwater. 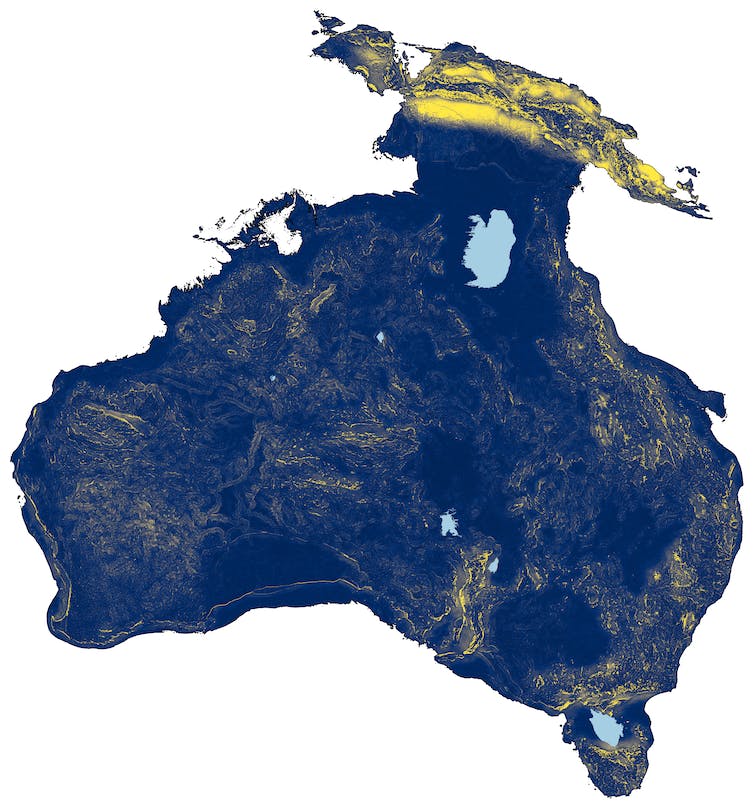 How the Sahul landmass would have looked more than 50,000 years ago. Author provided

We used this digital elevation model to understand what was visible to early travellers. Essentially, from each point in the continent we asked “what can you see from here?” This moving window calculates the largest “viewshed” map ever created. When our virtual travellers move, they reorient based on visible terrain everywhere they go. The figure above shows the prominence of features across the continent as increasingly yellow shades against the blue background.

You can clearly make out features such as the the New Guinea Highlands, the Flinders Ranges in South Australia, the Great Dividing Range in the east, and the Hamersley Range in the Pilbara region of Western Australia.

But navigation using prominent landscape features isn’t enough to tell us where the most commonly travelled routes were.

For this we also need to take into account other factors, such as the physiological capacity of people travelling on foot, how difficult the terrain was to traverse, and the distribution of available freshwater sources in a largely arid continent.

Billions and billions of routes

We put all these different bits of information together into a mega-model, known as From Everywhere To Everywhere (FETE), and created more than 125 billion possible pathways from everywhere on the continent to everywhere else. Each route represents the most efficient way to move from one location to another. This was the largest movement simulation of its kind ever attempted.

This gives us an idea of the relative ease or difficulty of walking across all of Sahul.

We cannot possibly examine every metre of the 125 billion pathways we created, so we needed a way to weight the relative importance of likely pathways. To do this, we compared all plausible pathways with the distribution of the oldest known archaeological sites in Sahul, providing weighted probabilities for each path.

This provided a scale going from the “most likely” to the “least likely” chosen paths.

This allows us to discard many of the billions of paths as less likely to be chosen, helping us focus on those that were the most probable.

We now have a first glimpse into where Indigenous Australians likely travelled tens of thousands of years ago.

These super-highways might have been more than just routes used for the initial peopling of Sahul.

Several of the super-highways our models identified echo well-documented Aboriginal trade routes criss-crossing the country. This includes Cape York to South Australia via Birdsville in the trade of pituri native tobacco, and the trade of Kimberley baler shell into central Australia.

There are also striking similarities between our map of super-highways and the most common trading and stock routes used by early Europeans. They followed already well-known routes established by Aboriginal peoples. 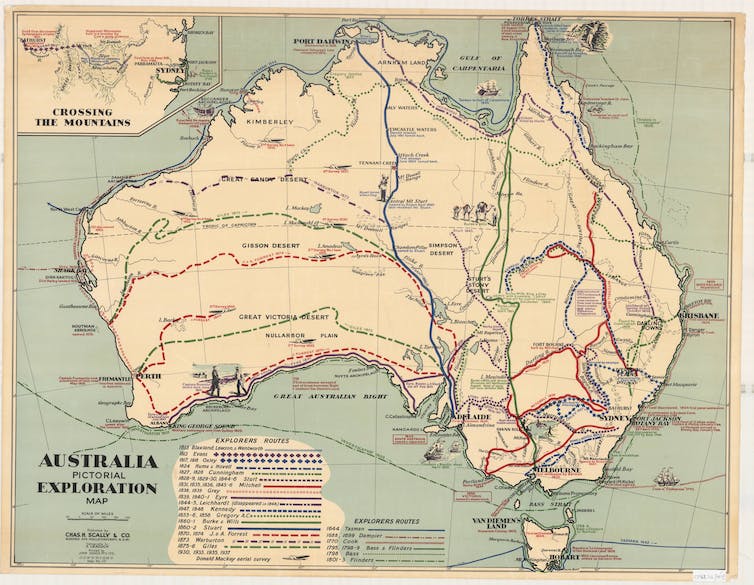 These Aboriginal exchange routes and the relatively recent trade routes of early Europeans cannot be used directly to validate a map from tens of thousands of years ago. But there are strong similarities that might suggest an extraordinary persistence of routes across the entire time period of human occupation of Australia.

Our findings also point to the now-submerged continental shelves of Sahul as important conduits for human movement.

We infer that early populations spread across the broad plains on the western and eastern margins of the continent (now under water) and through the region that now forms the Gulf of Carpentaria, which connected Australia to New Guinea.

It is worth noting these early people traversed and lived in all environments of Australia, ranging from the tropics to the arid zone. The ease of adaptation to all ecosystems is remarkable and one of the reasons for the success of the human species across the globe today.

Professor Lynette Russell (Deputy Director of the ARC Centre of Excellence for Australian Biodiversity and Heritage and Co-Chair of its Indigenous Advisory Committee), who was not involved directly in the study, noted:

The fundamental rules we described apply even to questions about how the first migrations of people out of Africa might have occurred, and how people ultimately proceeded to inhabit the rest of the planet.

This work might even have implications for humanity’s future, if climate scenarios require large-scale migrations. Learning from those who have been present in Sahul from more than 60,000 years ago could help us anticipate migration patterns in the future.

This article is republished from The Conversation under a Creative Commons license. Read the original article.