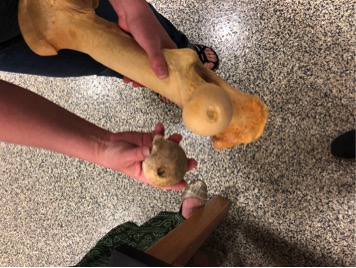 The zooarchaeology comparative collection is often used to assist local community members in identifying bones. Here you can see a femoral head of a cow which was unearthed on a woman’s property near a known cemetery.

Zooarchaeology is the systematic study of animal remains recovered from archaeological sites. The breadth of the field covers many topics not limited to environmental reconstruction, subsistence studies, animal domestication, and the ritual use of animals in the past. The dynamic nature of the field and its ability to help explain human and animal interactions often brings 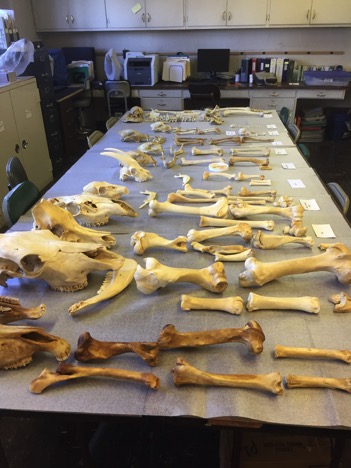 The zooarchaeological comparative collection is used to teach short courses for human and non-human bone identification with the Forensic Anthropology Center.

zooarchaeologists and wildlife managers together in order to provide accurate interpretations for modern conservation practices. Additionally, the field is valuable to law enforcement when human and non-human remains are discovered in comingled contexts. 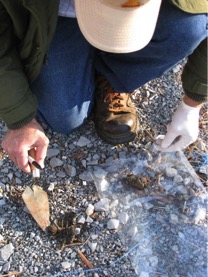 The Legacies of Walter E. Klippel and Paul Parmalee

The zooarchaeological comparative collection at the University of Tennessee was established in the early 1970s. Walter E. Klippel and Paul Parmalee were instrumental in developing the collection which currently includes over 12,000 vertebrate and 1,500 molluscan (shellfish) specimens. Since its conception it has become one of the largest of its kind in eastern North America. The collection has proven invaluable for both research and public service, and is utilized extensively in several courses offered through the Department of Anthropology. It also serves as an indispensable reference for students completing graduate theses and dissertations in zooarchaeology.

Support from the National Science Foundation (NSF Award # 9408643) has facilitated digitalization and reorganization of the collection. This support has greatly increased our ability to accommodate researchers from outside the department. If you are interested in utilizing the collection for research purposes, please contact the lab manager, Jen Green jgree119@vols.utk.edu 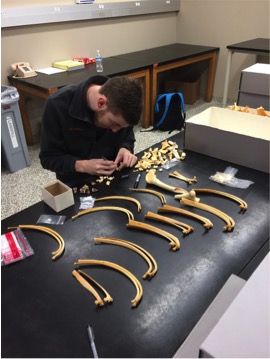 The zooarchaeology lab is always looking for great volunteers! If you are an undergraduate or graduate student who is interesting in getting involved with a research project or simply want to get your hands dirty in the lab and learn more about zooarchaeology, please contact Jen Green jgree119@vols.utk.edu Some of our current projects include: collections maintenance, weighing artifacts, and sorting faunal remains from Cheek Bend Cave in Middle Tennessee. 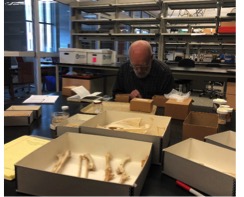 Walter Klippel has recently retired after over forty years of service to the University of Tennessee and the field of zooarchaeology. Over his career, Klippel has made scholarly contributions to the studies of taphonomy, environmental change in the Southeastern United States, and subsistence practices in North America, the Caribbean Islands, and Crete. He began his career working in rock shelters in Missouri, and went on to run large field projects in Middle Tennessee and to create a world-class zooarchaeological comparative collection. Former and current students and colleagues cover a broad range of topics inspired by Klippel’s interests in zooarchaeology and archaeology, including animal induced taphonomy, subsistence practices, morphological and range changes in species over time, species identifications, and allometry.

Recent publications made possible by use of the collection: 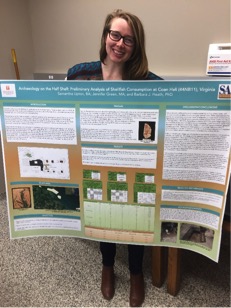 Sam Upton (in photo), Jennifer Green, and Barbara Heath presented a poster at the 2018 Society for American Archaeology (SAA) meeting in Washington D.C.

2015   An Historical Archaeology of Early Modern Manhood in the Potomac River Valley of Virginia, 1645-1730. PhD Dissertation, Department of Anthropology, University of Tennessee, Knoxville.

2013   “It all began, like so many things, with an egg,” An Analysis of the Avian Fauna and Eggshell Assemblage From a 19th Century Enslaved African American Subfloor Pit, Poplar Forest, Virginia. Master’s thesis, Department of Anthropology, University of Tennessee, Knoxville.