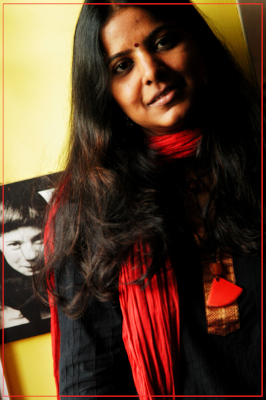 The Disasters, Displacement and Human Rights (DDHR) Program in the Department of Anthropology at the University of Tennessee, Knoxville, presented a free screening of the award-winning Tamil language film (with English subtitles) Maadathy: An Unfairy Tale, followed by a virtual conversation with its director Leena Manimekalai, hosted by Dr. Prashanth Kuganathan and Dr. Raja Swamy. The event was sponsored by the Chancellors’ Council on Diversity and Inclusion and the UTK Department of Religious Studies.

Manimekalai is an acclaimed independent filmmaker and activist from Chennai, India. Her film Maadathy: An Unfairy Tale depicts the violence in rural Tamil Nadu against a caste group that is considered not only “untouchable” but also “unseeable.” This violence continues to plague much of India today. Caste and gender are two of India’s primary victim demographics of violence, particularly of a sexual nature. While gender-based violence is global, caste-based discrimination is restricted to South Asia and its diasporas. The category of caste is unlike any other in the United States. While similar to the concept of class, it is hereditary, sanctioned by religious text, and enforced by violence. This film and discussion with its director will provide attendees with a unique perspective into a system of contemporary apartheid that is not based on skin color or physical attributes but instead on more intangible categories of human classification.