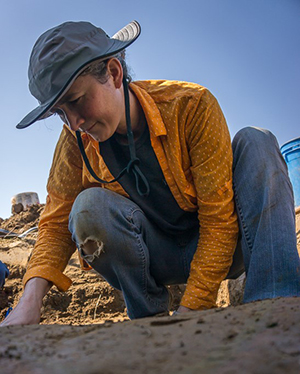 Kandace Hollenbach, assistant professor, is working with undergraduate major Hattie Ruleman on her senior honor’s thesis, which focuses on extracting, identifying, and analyzing carbonized plant remains from samples excavated from roughly 2,500-year-old archaeological deposits at UT’s Cherokee Farm campus. Hollenbach taught a field school at Cherokee Farm during the 2018 and 2019 May mini-terms. The project is part of her larger research effort to understand the transition from foraging (gathering) to farming in the Midsouth region, which includes East Tennessee.

Hollenbach specializes in paleoethnobotany, the study of ancient plant remains. Her work sheds light on the foodways of past peoples, which include the ways people procure, produce, process, cook, share, consume, store, and discard foods. These practices are tied to social and ecological opportunities and constraints. Understanding foodways helps to clarify the relationships of people within and between households, with neighbors, and with plants, animals, and other resources in the landscape.

Approximately 4,000 years ago, people in the Midsouth stopped relying solely on wild fruits, seeds, and nuts foraged from floodplains and upland forests. They began cultivating a suite of plants and domesticated at least five of them, including squash, sunflower, and chenopod (a northern cousin of quinoa). During this transition, peoples’ relationships with the landscape, and their mobility, also shifted, as early farmers invested resources in cultivated plots. By about 3,000 years ago, their increased investment led to a more sedentary lifestyle and changing relationships with neighbors, who no longer had access to (at least some) plants growing in those plots. The deposits at Cherokee Farm are related to these increased investments in floodplain cultivation. 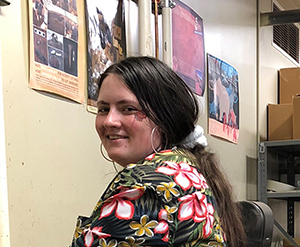 In her work, Ruleman has identified chenopod and maygrass seeds in the samples, in addition to hickory nuts, acorns, and grape seeds. Later deposits, dating to about 800 years ago, indicate a shift to maize farming and use of wild rice.

In modern foraging groups around the world, women are the primary gatherers, and this was probably true in the past. Hollenbach’s research places the decisions of past women at the forefront of her research. Among early foragers, women may have decided when to move camp to take advantage of ripening fruits, seeds, and/or nuts at particular places on the landscape. Given their roles as gatherers, women likely became the first farmers in the eastern United States. The transition from foraging to farming likely led to changing relationships between women and men.

Despite these important shifts in how groups interacted with the landscape, their neighbors, and within their households, few archaeologists have examined the consequences of the shift to farming in the Midsouth. Hollenbach’s work with Ruleman and other students is helping to change our understanding of the social and ecological consequences of the transition from foraging to farming.